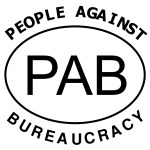 After 40 years the People Against Bureaucracy Group (PAB) is still going strong and bringing a level of common sense to the debates in the council chamber.

Local government works better when there are independent-thinking councillors making decisions that affect the lives of ordinary people in the different communities across the town. Decisions that are based on common sense are always better than those driven by ‘party politics’, where individual thought is over-ridden by the ‘three-line party whip’.

The PAB Group was formed to protect the Green Belt and this remains our determined aim. The proposals put forward in the Joint Core Strategy to allow development on the Green Belt in spite of adequate amounts of non-green belt land in the three areas was a mistake and needlessly tested the resolve of community-minded councillors.

We are proud of our achievements. In 2017 voters will have the opportunity to support the same old tired ‘party political’ candidates, who usually say one thing and do another, or support independent-minded people who always put people first.

AIMS OF THE PAB GROUP

The objective of the PAB Group is to promote and protect the interests of the Council taxpayers by the following means:-

To elect members to Parish, Borough and County Councils
To seek by legitimate means the elimination of excessive bureaucracy in local government.
To monitor the activities in all Councils to ensure that the local residents’ interests are best served.
To discourage the activities of party politics in local government.
To encourage more open government by seeking to reduce the amount of business behind closed doors, which is often to the exclusion of the Press and the general public?
To put people first at all times.

THE PRINCIPLE POLICIES OF THE PAB GROUP ARE:-

To keep party political issues out of local government.
To protect the Green Belt around the town and the Cotswold Area of Outstanding Natural Beauty.
To support at all times the policies contained in the Borough Local Plan and supportive documents.
To promote sensible developments that provides houses, employment and services for local people while retaining the proud and beautiful architectural heritage of Cheltenham.
To preserve the environment and all the integral parts of its complex structure.
To support the setting of realistic budgets that provides the necessary services for the people. Budgets should be set with local taxpayers in mind and not political aims.

HISTORY OF THE PAB GROUP

The People Against Bureaucracy Group was formed in February 1976 following a public meeting in Up Hatherley. At that time, a group of concerned ratepayers wanted to see an end to the many ‘secret’ meetings held behind closed doors, reduce Council bureaucracy, achieve better value for the money they were paying in council taxes; and the group wanted to constructively criticise the policies and expenditure of the Council.
At the time, PAB support was mainly in the former Cheltenham Rural District Council area, which later became part of a newly formed Tewkesbury Borough Council.
Within nine weeks of its formation, the voters of the Tewkesbury Borough had elected five PAB candidates to the Council. From that point, a lot of progress has been made.
Following years saw PAB councillors being elected at local Parish Councils, Borough and Gloucestershire County Councils and their presence was respected for their independence and common sense approach to matters concerning both the Council and the ratepayers.
As a result of further national boundary changes in 1991, the periphery parishes around Cheltenham were transferred from Tewkesbury Borough Council to the now enlarged Cheltenham Borough Council area.

It is obvious that locally elected people who understand the local views should deal with all local issues. They should not be pre-determined at remote ‘Party Political’ headquarters. It is apparent; therefore, that electing a PAB councillor to serve your community guarantees an independent person free to put your point of view. When free of the constraints of Party Political loyalty and pre-conceived views, local matters can be addressed clearly and independently on merit. We are growing in support but need more to help get a fair deal for you.