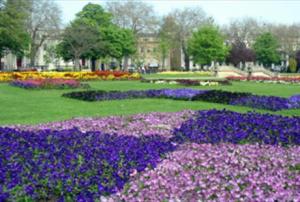 The Imperial Gardens is one of many attractions that bring thousands of visitors to Cheltenham each year. The colourful floral displays are breathtaking each year.
Cheltenham is full of gardens and parks, which is why the town was once called “a town within a park”, and even “the garden town of England”.
It is sad to read in the local newspaper that these descriptions might no longer be applicable in future years; if new council plans to change the present growing and planting method get the go-ahead in the future.
To replace the present arrangement with perennial plants, will not be the same, no matter how many arguments are put forward in support of them.
Closing the Arle Nursery, as is reported, would be the death knell for the floral displays because Cheltenham is one of the few local authorities to have an in-house nursery, which not only grows the bedding plants for the Imperial Gardens and the like, but it also grows and supplies some 650,000 plants to several other local authorities including Stratford District Council and Chesterfield Borough Council.
If this is still the case, then surely Cheltenham should be looking to expand this side of their operations, not do away with it, as seems to be the case.
This bleak news will soon be debated by the councilors. It will be interesting to see whether common-sense will prevail, or whether the ruling group will put ‘party political’ interests before the needs and wishes of the ordinary people.
We shall see.